Curated by: Being in The World
As a part of the project Liminal
Berlin 2017

In the installation at Gallery Toolbox Åsa Elieson stages an encounter between two female cultural phenomenas, pop singer/actress Lana Del Rey and the Greek mythical figure Medea from Euripides drama. The text on the glass of the installation – that graduatlly erases by the dripping water from above – is extracts of some of the songs of Lana Del Rey. The superstar is especially popular amongst young whites from the American working class. Del Rey seductivly affirms the dream of success and feminity provided and conditioned by patriarchy, yet herself possessing the rock and roll attitude of female empowerment for a twenty-something-generation in her videos and songs. The woman portraited is often one who totally and recklessly gave herself to the idea of romantice love, without really having anything to jepordise. 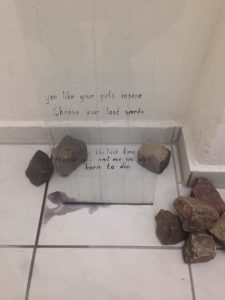 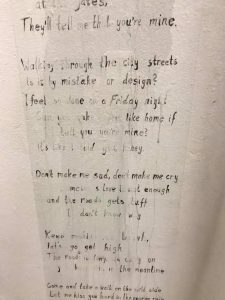 The myth of Medea is often presented as a story of personal revenge or a question of passion, suffers, scarifies and maybe cruelty of a betrayed woman.
To instead think of the Medea figure as a political subject that is unable to serve as an agnostic or rebel to a system, but rather found left alone at a liminal space of the two dominant structures of the liberal democracy and the conservative patriarchal clan of the extended family that both withdraws from her simultaneously when she gave up God to be with a man, gave up liberal state protection to go with passion, and is left out of the clan system of the family when Jason decides to leave her for the kings’ daughter in the new country.

But by instead of being an object – the other – insisting of being the subject, e.i. the creator of action, Medea is at the core of the breakdown of the political systems as we know them, and must therefore be demolished. There is not a ”place” for her to withdraw. She has reached a point when she cannot flee, fight or freeze. Nighter can she stop being the active verb that is her very constitution. Action demands space. She finds herself in a liminal space. 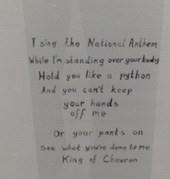 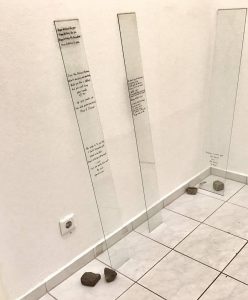 With a rock and roll rock attitude pop icon Lana Del Rey on the other hand produces by text and videos a ”persona proposal” that totally affirm the feminin object staus. She takes the affimation so far as to the point where an ironic approched of having ”seen throught it all” and there after taking her parts in the play, making it ”real”. By this deed and role play at the borders of fictions and dreams she’ll just about turn into a very subject by this deed. Del Rey places this femininity in such strong association to the male protagonist, the American freedom, that she in the role of Femme, can feed from the neigbouring feminine myth by playing and exaggerate all the female roles of the American dream. The Lolita, The House Wife, The Successful Actress, The Girlfriend of a Rich Gangster or First Lady.